Web analytics takes the guesswork out of improving your website. Right?

Web analytics will tell you where to target your guesses, along with your knowledge, experience, creativity and skill, and it will also tell you if they have worked. However, it cannot tell you what to do. But that does not mean it isn’t vitally important to the success of your website.

Here is a real life example of how a bounce rate was reduced from 70% to less than 20% that shows how important using a system like Google Analytics is.

You can see the results, in a graph taken from Google Analytics, below.

I used to run a campaign called Save Our Savers. Our website consisted mainly of blogs, each blog had its own web page. We used to publish a blog and then tweet and Facebook a direct link to it.

Because we used Google Analytics we knew we had a problem. We could see that most people simply looked at the blog page and left. People were not exploring the site and much of the content was being ignored.

In technical terms we had a very high bounce rate. Often between 60% and 70% of visitors only visited a single page.

I felt that there was more on the web site that they would like if only it was drawn to their attention. There were already big colourful icons below each blog linking to a related blog that might be of interest to the visitor, but hardly anyone was clicking on these.

Having identified the problem, I now had to find a solution.

The most obvious thing I could think of was to give people even more choice about where to go next. So I added some tags at the bottom of the post. Unlike the existing links these would take people to groups of articles on particular subjects.

You can see them in the image below: simple grey boxes which group the blogs into subject matter like “Interest Rates” and “The Economy”. 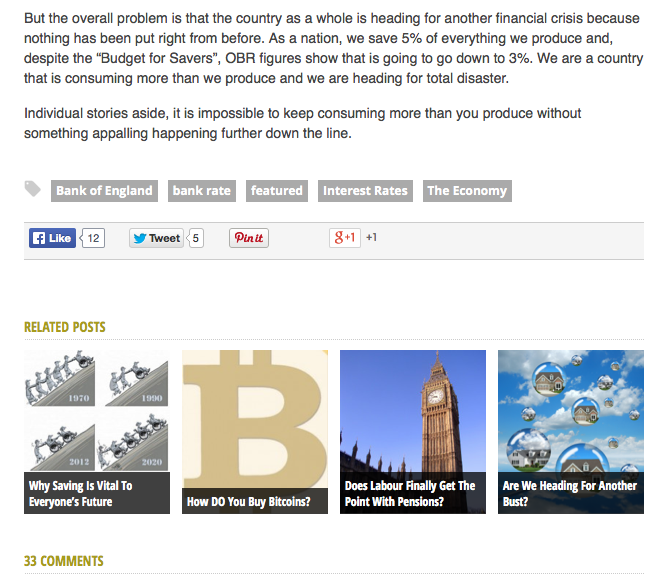 Because we used Google Analytics, we saw the result immediately. The bounce rate dropped down to under 20% and for most of the next month it stayed below 5%.

Its amazing how much difference a simple change can sometimes make to how visitors behave on a website.

But without Google Analytics you wouldn’t have known you had a problem and neither would you have known when you had found a solution.